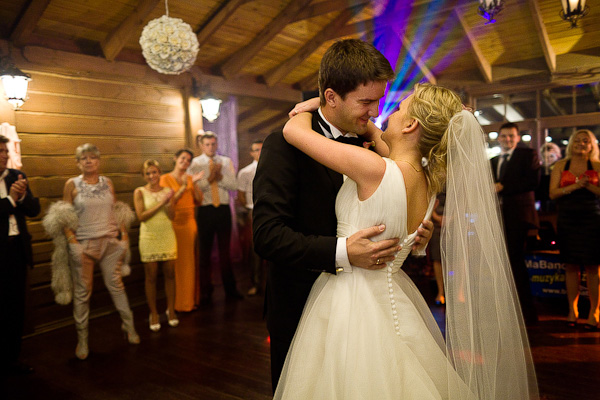 Finally the big day came. The weather forecast had been uncertain, but eventually it turned out good. Armed in a double-checked gear and faith in my skills I rushed to capture the moments. Here are several of the images. 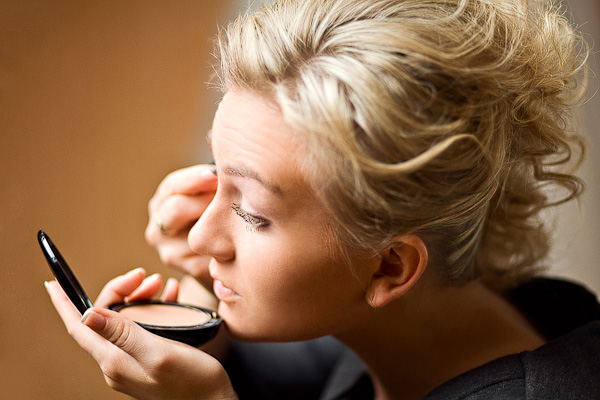 The bride before leaving home. This is a natural light shot – window light is a beautiful thing.

Just before putting her dress on, the bride spontaneously, and for just a brief moment, grabbed her mother’s hand. This became one of their favorite images revoking the emotions of the wedding day. 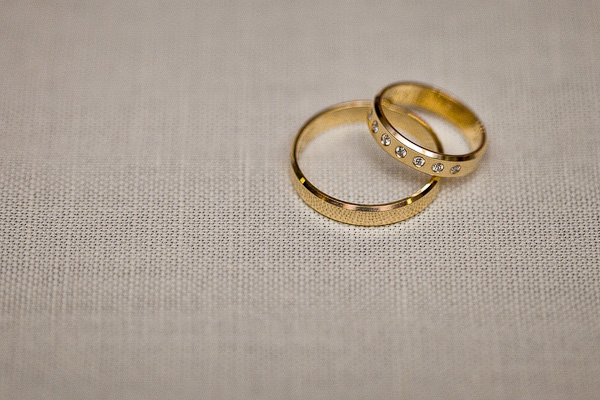 I wanted to keep the rings shot clean and simple. Captured with a 100mm f/2.8 macro. 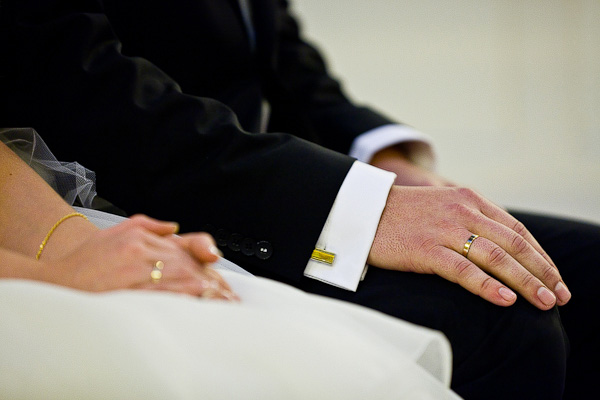 In order to be as inconspicuous as possible I did not use a flash during the ceremony. And really nothing beats a fast telephoto lens. 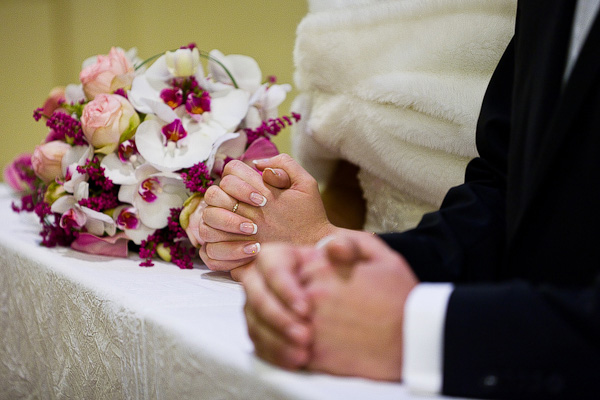 With mixed light of all flavors, incandescent, fluorescent and daylight, I had to double-process many of the images from the church and blend the individually color-corrected layers. Converting to black and white is another solution but usually color is my way. 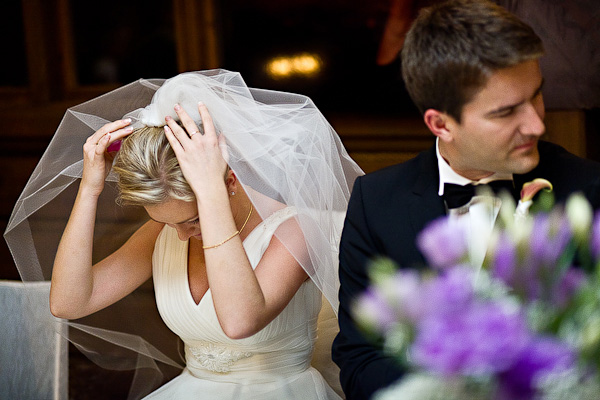 Jagoda looked fantastic in her dress and long bridal veil. This and all the images below were shot with an on-camera flash bounced from the walls or ceiling. 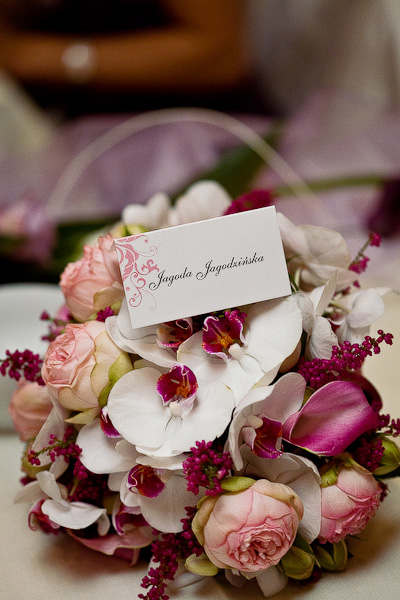 The bounce flash results in a soft and directional light. Such light gives form to the photographed subjects. When it hits the subject at an angle it also gently brings out texture. 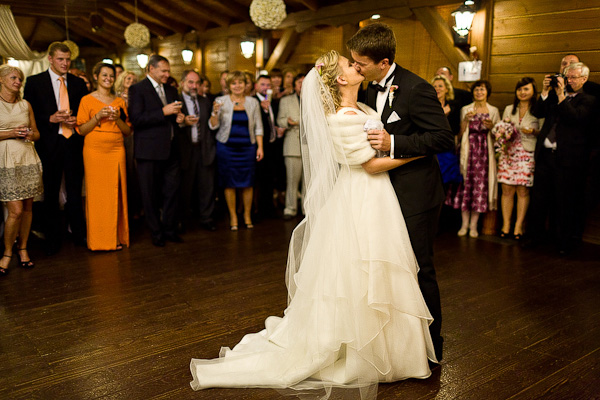 I used a warm gel (1/2 CTS) to balance the color temperature of the relatively bluish flash. In many cases, however, this may have not been necessary as I worked with dark wooden walls which give that golden glow to the bounced light. And the color was later fine-tuned during the processing of the RAW images. 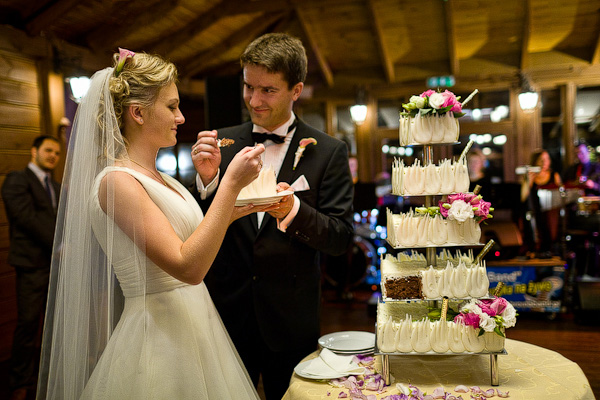 An important technique which I used at the reception is dragging the shutter. Basically when shooting with a flash there are two exposures superimposed in an image – one is for the subject briefly illuminated with the flash and the other for the background filled with the ambient light. Without the flash the subjects would be rather dark in this image. But the flash duration is very short and the relatively slow shutter does not effect it. What the shutter does, it controls the ambient light only. By exposing longer (dragging the shutter) you can let more ambient light into the camera and brighten the background. 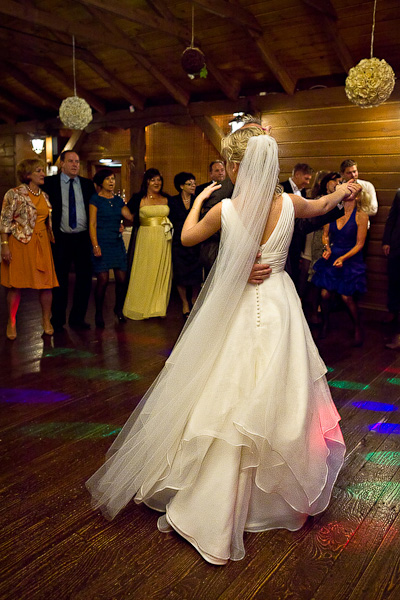 I really like this image for its composition. The diagonal line of the veil conveys energy. It is curved, and curved lines are elegant. 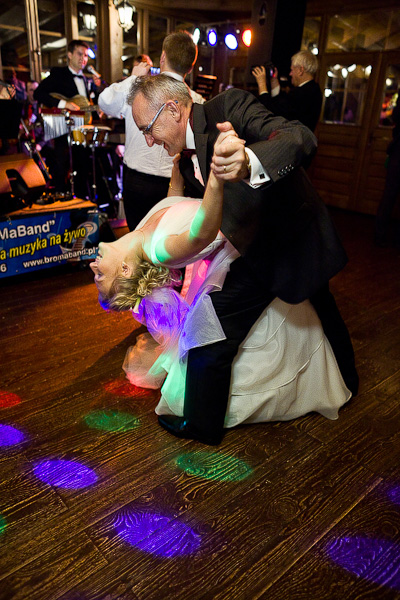 The bride with her father. There are two major aspects of an image like this – it’s emotional impact and the technical qualities. I would always favor the emotions and not hesitate to release the shutter even if the conditions are not perfect. A bit of luck helps but that I think is just a function of the number of frames composed and shot.

The unveiling of the bride. Traditionally in Poland the bride takes off her veil and blindfolded throws it behind her, as unmarried women dancing in a circle attempt to catch it. It is believed that the young lady who catches the veil will be the next person to get married. This is a similar custom to the tossing of the bridal bouquet practiced in some western countries.