Overpowering the sun is one of my favorite lighting techniques and I will briefly explain how I use it. But let us begin with the camera setup.

I shot these images with the Canon 5D mark II using the EF 24-105mm f/4L IS USM lens at its widest zoom setting. On a full frame sensor 24 mm is about as wide as I can accept for photographing people without distorting them too much. I love this lens for it’s great contrast and color. It is tack sharp when stopped down and very sharp when wide open. 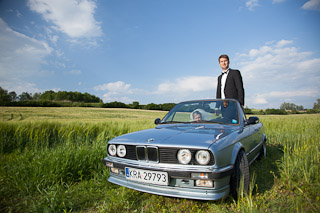 This is how the scene actually appeared on a sunny afternoon, shot at 1/200 s, which is my sync speed, ISO 100, f/4, and with an ND4 filter. I could have shot it at f/8 but I traded two stops of aperture (f/8 ? f/5.6 ? f/4) for the ND4 filter. This gave me an identical ‘proper’ exposure but with a more shallow depth of field as an artistic decision. You can see a hard shadow at the side of the car coming from the sun and overall the image is not appealing. Notice that I am shooting with the sun behind me and slightly to my side. Had I shot straight into the sun the sky would have been less saturated. 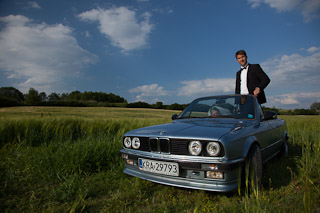 I stopped down the aperture to f/5.6, i.e. by a stop, to underexpose the foreground and darken the sky. I also stacked a polarizing filter to further darken the scene by approximately 2/3 of a stop and to cut down the glare and saturate the colors just a tad more. The sky looked good at this point but the side of the car was lost in the deep shadow. These images are basically straight out of the camera. 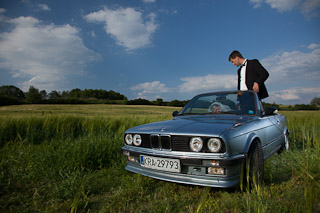 To open up this shadow and to bring out the side of the car from the dark I added a Nikon SB-24 hot shoe flash pointed at the car, camera right and just outside of the frame, set to full power and fired with a Pocket Wizard. This added depth and dimension to the car.

To light the scene and the subjects I used a 600 Ws strobe set to full power, with a 22″ (55 cm) white Beauty Dish as my main light. It was positioned just outside of the frame, camera left, in front of and above the car, pointed slightly down and fired with a Pocket Wizard. Notice that I pulled in the camera to exaggerate the wide angle perspective. The battery pack of my strobe run down, so I powered it from the battery of the car (hence the cable visible at the side of the car). The final image was retouched and post-processed of course.

And here is my second favorite shot from the day:

This is a shot without flash. I deliberately underexposed the image to darken the sky and make it more dramatic. The ND8 filter allowed me to open up the aperture for a more shallow depth of field and even shoot at a slightly slower shutter speed to convey the motion of the barley in the wind. There is some darkening of the corners resulting from stacking of the filters on a wide angle lens, which I had to take care of later in post-production.

Here the scene is lit with a 600 Ws flash set to full power, with a 22″ (55 cm) white Beauty Dish, same settings as above. The Beauty Dish is my most efficient modifier, yet it gives a quality of light which I love (especially when used at a short distance, as described in my post on lighting with a Beauty Dish).

The lighting made the subject pop and also brightened the foreground. Additionally, I cross-lit the subject with a gridded off-camera hot shoe flash (the SB-24 at full power with a Honl 1/8″ grid) to give detail to the veil. In summary, by darkening the sky and lighting the foreground I compressed the broad dynamic range of the original scene. Again, the final image was retouched and post-processed.

Because of the sweeping perspective which I wanted to capture the light could not be positioned really close to the subjects. It would be difficult to pull out these shots with just small hot shoe flashes unless it was dusk or I would have to place the main light closer and clone it out in post.

Do you know of other techniques for overpowering the sun? Let me know.